Novelist Filip Florian was proposed by the Foundation for Poetry 'Mircea Dinescu' to be the this year's Romanian beneficiary of a Halma grant. Filip Florian stayed at the Thomas Mann Culture Center in Nida, Lithuania in June, and he will stay and work at the Slovene's Writers Association's Apartment in Ljublijana, in September.

In addition, two public readings with the Romanian author were planned, at two international literature festivals in September:

Thursday, 2 September, Filip Florian will read at the Vilenica International Literary Festival in Slovenia from his novel “Little Fingers”, at 7 p.m. at the St. Daniel Church in Hruševje. 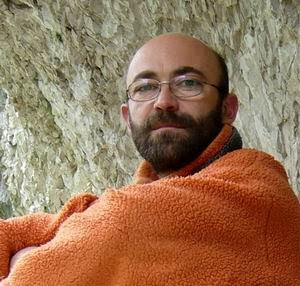 Filip Florian was born in 1968 in Bucharest. After his studies in geology and geophysics he worked as a reporter for "Cuvîntul" newspaper, Radio Free Europe and Deutsche Welle. His novel Degete mici (Little fingers) was awarded „best prose debut” by the Romanian Writers Union and others in 2006. It has been published in Hungary, Germany, Poland, USA and Slovenia.

His novel „Zilele regelui” (The Days of The King), published in 2008, was declared book of the year by the „Colloques of the Contemporary Romanian Novel”. Filip Florian is considered a major talent of the Eastern European literature. He lives in Bucharest.

“These days, I swear I wouldn’t know what to say about myself. At forty, it has become clear to me that I’m never going to be a football player, I’m beginning to lose hope that I’ll ever have long hair, I wake up increasingly early in the morning, I eat unbelievably few cherries (which I once cherished), I smoke unbelievably many cigarettes (which I once despised), truth seems to me quite questionable and the weather forecasts leave me cold. Fortunately, though not as strongly as I used to, I still believe that one day I’m going to catch a twenty-kilo sheatfish.” (Filip Florian)

The HALMA grant for Filip Florian was made possible by the S. Fischer Foundation.